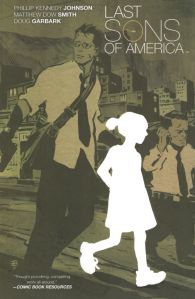 I first heard of Phillip Kennedy Johnson and his Last Sons of America on IGN.com’s review and interview about his debut graphic novel, and upon purchasing it and reading it, I must say that I’m quite impressed. Now, before I delve into the specifics of why you should read Last Sons of America, it is important to become acquainted with the writer himself. Johnson has written several more works including Warlords of Appalachia, Smoketown, The Lost Boys of the U-Boat Bremen, and The Power of the Dark Crystal all while being what appears to be a renaissance man: he’s a trumpet playing, teacher, who’s been in the United States Army, and does mixed martial arts (see his website for more).

Boom! Studios is a comic publisher based out of California that focuses on indie comics as well as adaptive comics from various television shows (Power Rangers, Steven Universe, Adventure Time, Sons of Anarchy) and movies (The Power of the Dark Crystal). One of its artists (and the artist of Last Sons of America) readers may already be familiar with due to his work on the X-Files graphic novels: Matthew Dow Smith. Smith’s work was colored by Doug Garbark. Boom! Studios has a pretty diverse selection, so if this is your first time hearing about it, you should check the official website out for other good reads.

Published originally as four separate issues, Last Sons of America is now available in this 112 page, stand-alone trade paperback volume which features all four issues put into chapter form, contains their cover art in a back appendix, and a foreword by Ron Marz (Batman/Aliens, DC vs. Marvel). Marz’s forward to Last Sons of America places the text as a dystopian story that is filled with three important aspects: “characters you care about, a compelling concept, and terrific artwork,” and he is correct on all three accounts. It is from his outline that this book review is based. Furthermore, to honor his notion that “I don’t need to tell you much about this story; you’re going to experience it for yourself, and you should go into it unspoiled,” I too will not be spoiling (too much) of the story, as I am in complete agreement. 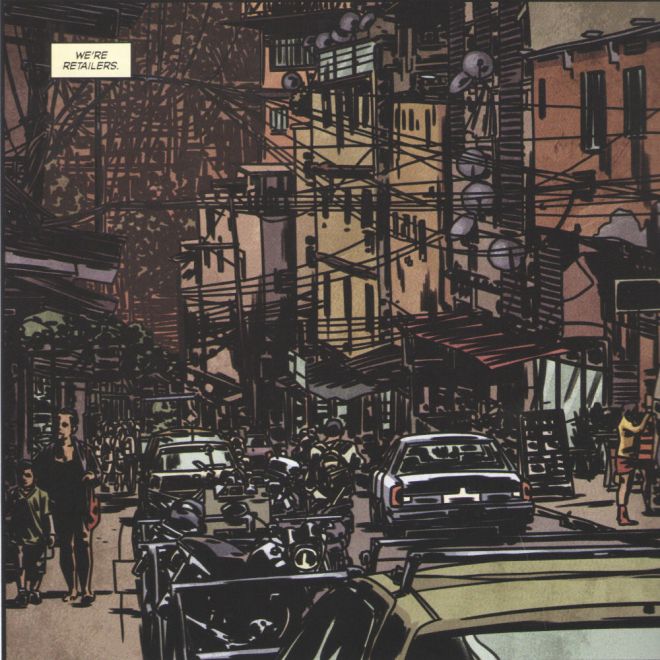 Last Sons of America seems almost prescient in its inception and publication earlier this year in light of the new presidency of Donald Trump. In a time when we’ve heard the motto “build a wall” at campaign rallies, and bullying rates of minority students are at an all-time high, Last Sons of America envisions a world where white America must come to terms with infertility due to the aftermath of bioterrorism by importing children to the states so that couples can have families — so much for ICE. Children as a world commodity and import to the united states places Last sons of America much in the vein of Cuarón’s Children of Men and Atwood’s The Handmaid’s Tale. In the pages of this action-adventure, thriller, surprising questions about humanity arise to a literary level of discourse in an artistic style that draws heavily from noir and spy films.

The heavily inked style of Matthew Dow Smith in Last Sons of America hearkens to noir films and gritty realism found in serial detective thriller dramas like True Detective (please, HBO, make Last Sons of America a show). The way Julian is drawn could easily cast Peter Dinklage in the role. The muted colors, emphasis on shadows (and who or what may be lurking in those shadows), and Independent American style add realism and depth to the dystopian landscape: this is not a child’s story, even if the plot focuses heavily on the treatment of children as commodity. It should be noted, though, and perhaps it was intentional, that color seems to appear more often when children are present in the text — a symbolic gesture of them as innocent, and perhaps able to change the bleakly drawn and colored world in which the adults inhabit. At times, the darkness can be overwhelming, and the drawings hard to see — a minor gripe —, and, to be fair, that’s probably the point: darkness is overwhelming, and the characters do live in dark times. 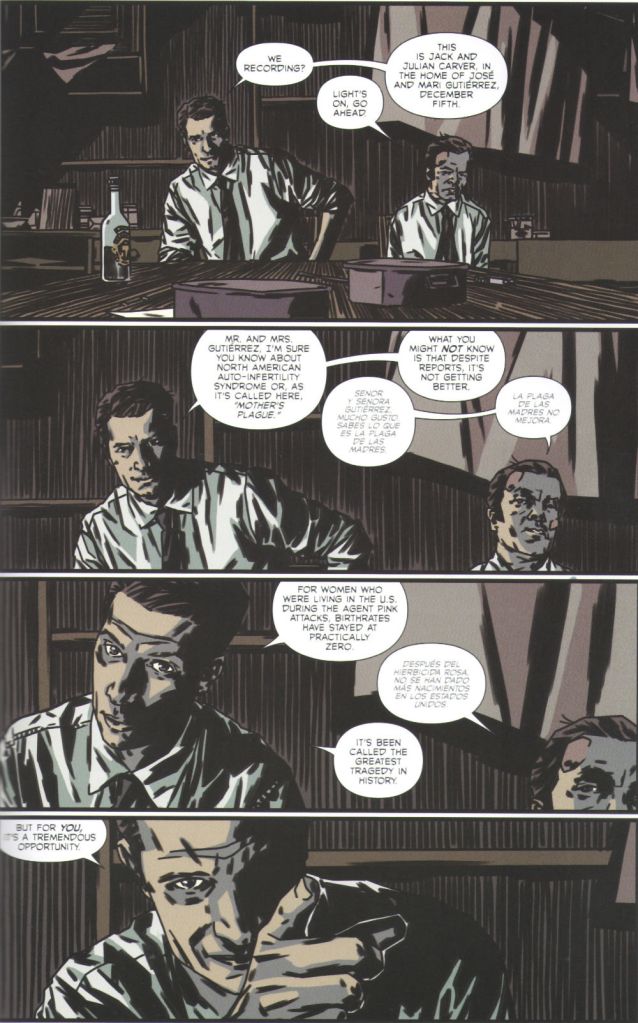 The concept of the story strikes at the heart of American dream: having a family. Upon the Agent Pink attacks, American women are rendered barren, and the story follows adoption agents and brothers Jackie and Julian — two of the last naturally born children in the United States — as they work in Nicaragua finding families who will give up their children to American families in exchange for a hefty paycheck. When they are unable to meet quota for kids, Jackie kidnaps Sara, a drug lord’s relation, and the brothers face the fallout of this action.

In a characterization that echoes that of Of Mice and Men, Jackie Carver is the taller and stronger of the titular duo of sons; however, he isn’t the leader, and his brainless, ill-conceived actions often spur the conflict of the narrative forward, like when he decides to kidnap Sara for the adoption agency out of desperation from failing to meet a monthly quota, or provide slight comic relief, like his inability to speak Spanish. He is a foil character to his brother, Julian Carver, who’s affected greatly from the Agent Pink attacks that crippled America’s ability to reproduce. Consequently, he suffers from dwarfism, odd growths on his face, and he has limbs of uneven length that often require Jackie’s assistance for daily tasks like tying his shoes. What he lacks in stature, he makes up for in knowledge. Unlike Jackie, he’s bilingual and the and conceptual leader of the duo. 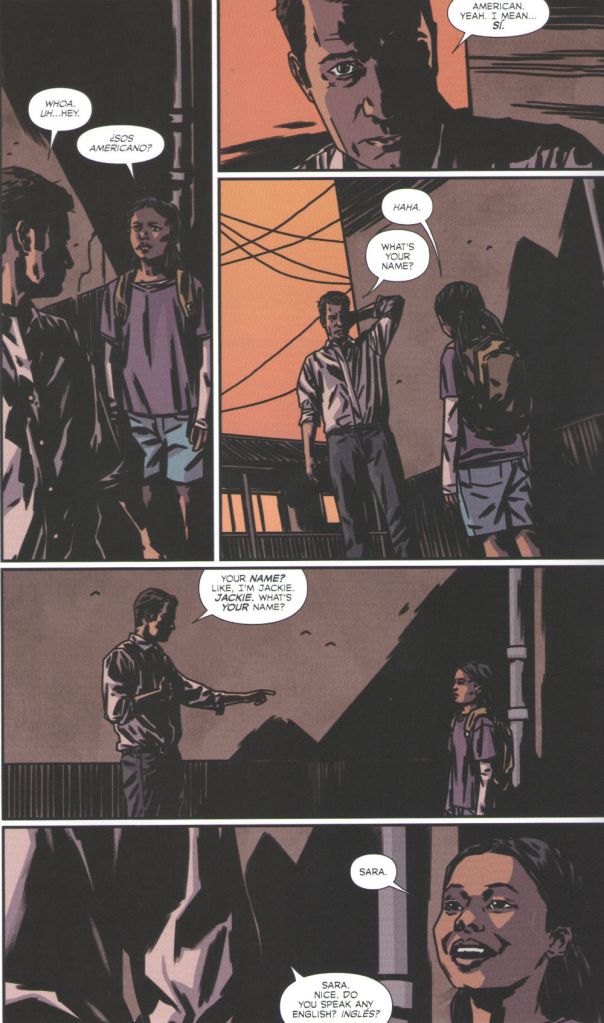 Sara, a Nicaraguan girl who Jackie kidnaps, is highly memorable for her Star Wars catch phrases and what she says about Jackie behind his back in Spanish. There’s more to her than being a damsel in distress, as she’s anything but that; however, I won’t say much else because her secrets help drive the rest of the story.

The last major character is Rowe, and since she shows up about halfway through the story, I won’t say much about her lest there be spoilers; however, she is probably my favorite character: she’s a strong, independent woman, who’s good friends with Jackie. Like Sara, she too has her secrets, and more than one major plot development depends on her.

Now, of course, I can’t leave out Don Carlo (not pictured here), a drug lord and blood relation to Sara. Throughout the majority of the text, he lurks in the shadows and manipulates forces beyond Jackie and Julian’s control. However, unlike the stereotype he could have become, Johnson gracefully gives him a backstory that somewhat paints him as human and complements one of the sub-themes of brotherhood, while complicating our views of him as the bad guy, and the payoff with his character is well worth the wait.

Without spoiling the rest, I’d instead like to focus on the literary aspects of Johnson’s story, which gave the book surprising value, as I was expecting a noir-inspired thriller and a protagonist with a white savior complex. Thankfully, I was wrong.

Much of the text challenges the reader’s ideas about race, wealth, family, and the value of human lives in an extreme form of human trafficking. In some of the early exposition, Jackie reveals to the reader that, “In the states, a healthy ten-year-old goes for upward of $200K. Health five-year-old? Double it. . . . Young white kid? Write your own ticket” (Johnson 21.4). One can only imagine what is happening in the states; furthermore, with prices like this, one must wonder what is happening when it comes to social classes in the states. Those of low-income must be slowly dying off, and the rich are the only social class that will eventually be able to reproduce due to their adopted children. However, even in our current adoption systems, the costs are high, and the preference for white children over those of color is sadly reflected here. Despite the commentary on the adoption process, the text actually goes beyond that and into a nihilistic vision of the future where the adoption process might as well be slavery. A poignant scene shows how children are commonly bought and sold at a mercado (market), and they are divided and sold by race and quality of stock to anyone who can afford it — even creeps who ask if a child is clean (translated from Spanish).

With this in context, the brothers form a framework for the commentary: Jackie believes that the children’s market and adoption process is the way of the world now (capitalism); Julian is more optimistic and believes that it’s not about money; it’s about “find[ing] parents who need kids and kids who need homes” because they (the brothers) have to “put America back together” (Johnson 19.3-4).

In a text with such well put-together concepts, art, characters, and stories, I only wish there was more to be explored — and there is plenty hinted at (cloning, other countries, literal trafficking).  The world which Johnson creates eerily reflects our own and reminds readers of the depths of depravity to which humanity can sink. To me, this early statement by Julian sets the overall message of the book: America needs to be put back together again. In a time when there are travel bans and deportations, race riots and debates about whose lives matter, America needs to look beyond isolating itself as a defined box containing one dream. It contains the dreams of all races, all genders, all nationalities, and we need to recognize those dreams and that no price can quantify a human life. If we fail to recognize this, then perhaps our children can.